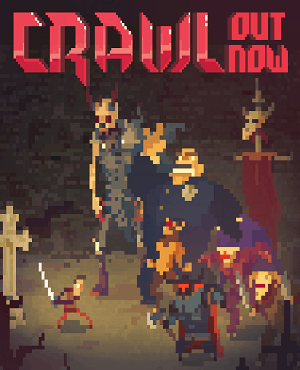 Roguelike hack’n’slash in the old-fashioned pixel artwork, in which we traverse dungeons filled with various traps and monsters. The game is designed for fun in the local multiplayer mode, where players compete against each other by controlling alternate characters of heroes and monsters. Crawl is a funny hack’n’slash, designed to compete in local multiplayer mode in a pixel artwork. The dangerous heroes of the heroes and the monsters defending these dungeons from unwanted visitors are facing each other in the game. Production is the debut work of Australian independent Powerhoof.

The game can be played from 2 to 4 players. One of them takes on the character of a daredevil, trying to wade through the various trapped and bloodthirsty monsters of the dungeon. The other players control the traps and monsters, trying to eliminate the hero and prevent him from reaching his goal. In the case of the hero’s death, the players change roles. Control over the daredevil takes over the player who managed to kill him and the next game starts exactly where his predecessor lived. Fun mechanics resemble some classic hack’n’slash games in which the main character gains experience, advancing to the next level and improving his skills. Of course there are obviously different types of armor and armor, which are scattered randomly in the recesses of the underground. Interestingly, the new player taking on the daredevil character retains the experience gained by the predecessor and objects. The goal of the game is to reach level 10, where the main character goes through a mysterious portal, starting a fight with the final boss.

Crawl promises to allow us to be the underworld ruler. This is not true – the player only runs through darkness crawling after a small, heroes-attacked kingdom. This does not change the fact that this simple game is really good. Maintained in a cartoon convention, the production of Nerdook Studios is a hybrid of strategy and RPG. We play as a dead king and his daughter-necromancer. After their kingdom has been invaded by the mighty Red Queen, they try to fend off the enemy with the help of the undead, warlocks, and all kinds of fouls. Divided into several dozen short chapters, the game consists of a series of battles fought across the land during which we attempt to gain allies or unlock new abilities or artifacts. Each skirmish lasts no more than a dozen minutes, and after each one we can choose one of three prizes, or, less often, make a choice that is changing to some extent further adventure. Fighting is played in small arenas, and there are only a few units on each side. Before each encounter, the game randomly draws a few randomly chosen troop units, allowing you to select the soldiers who are best suited to what your opponents throw at you.

The battle consists of several rounds – when all our underlings fall down or we can eliminate the other side, the action enters the meal. The winner is the one who stays on the legs. The simplicity and clarity of the whole combat system make the game really enjoyable. Information about the strengths and weaknesses of the troops and the drawn bonuses are presented in a clear, easy to understand manner, and the good gameplay speed makes us bored at any time, waiting for the opponent to move. Crawl can not boast an exceptionally successful graphics or captivating storyline, none of which does not detract. Cartoon styling makes the zombies look a bit like those of Plants vs. Zombies, which adds to the overall charm. The minimalist interface makes it easy to find all the information we need and is extremely easy to learn. The Nerdook studio is perfect when we want to play a battle or two at leisure. But he can also hold the computer longer. This small, nice production is capable of delivering really a lot of fun.